Division of The Chemical, Biological, Radiological and Nuclear Protextion - CBRNP 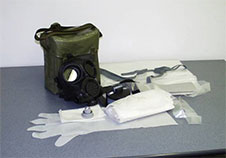 ISOLATION – The research of construction components and assembly groups for the isolating skin protection equipment.

The research of the stability of the construction materials and components of the individual protective equipment under the conditions of natural and accelerated ageing according to NATO standardisation documents, Czech Defence Standardisation and Czech technical norms.

Using selected nano-technologies and nano-materials when modernising materials and devices used in the armament of the Army of the Czech Republic or when developing new protective equipment and the materials meeting current and perspective NATO requirements.